From Birmingham city centre go over the Hockley fly over and after the lights go forward fr 50 yards approx. and our centre in on the right hand side of Soho Hill

Enter a brief description of your business

From Birmingham city centre go over the Hockley fly over and after the lights go forward fr 50 yards approx. and our centre in on the right hand side of Soho Hill

My name is Linda, when I first met Kyo-shi John Richards, I was recovering from a breakdown and suicide attempt. I was in a very dark place. I spoke to Kyo-shi about my son enrolling in a Karate class, as he is small and slightly built and I didn&rsquo;t want bullying to be a problem in later life. I also wanted him to learn the core values of self-belief and discipline and help him achieve a peaceful state of mind. He started with two trial lessons and loved it. He&rsquo;s now on his ninth belt, having gone through all the PEE WEE (young child belts) and is now a 9th Kyu (his second Junior belt) and has had the confidence to fight in 3 fight nights and win most of his fights even against larger children with much higher belts. As Karate teaches respect he is playful with his opponents afterwards checking they were ok and happy. He has competed twice and won a bronze in his second competition. He has also become part of the B squad and is striving to reach the A squad, and now has been nominated for an award at the Extravaganza night &ndash;open to all by ticket on 25 April. Then my husband decided that being in his forties it was time to get fit. He is now achieved his fourth belt and lost a stone and a half. My husband finds it hard to find time to train due to work commitments, but that doesn&rsquo;t hold him back as Its not about belts, its about your own journey, doing the best you can. I meantime would sit watching them wishing I had the physical ability and confidence to join in what was clearly a great time. I have Bipolar 2 (a type of manic depression) and Fibromyalgia a fatigue syndrome similar to ME but with constant pain, osteo arthritis, inflammatory arthritis, joint hypermobility syndrome and chronic pain disorder and other issues. I tell you this only because I want you to know that no matter what your problems you can still do Karate. I spoke to Kyoshi and agreed to try and then leave the class early. I have now just after a year achieved 6 Kyu my fifth belt something I once could only dreamed of, I was nearly crying when I received it. My endurance and physical strength improves constantly and my state of mind is calmer using karate philosophy to control my mood swings. Our house is constant karate we are all always throwing punches and kicks and throwing blocks up with each other. This has brought us much closer as a family. I feel this is a really important thing for the community; it helps people on so many levels. The student creed is a wonderful thing to live by and well thought out. We have even now turned part of our property into a gym- with of course a punch bag! Karate Birmingham. Karate family, 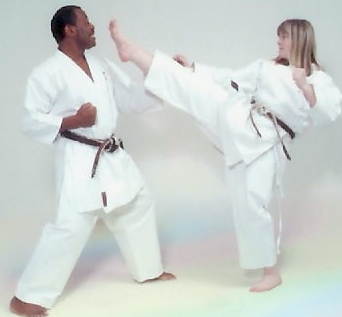