Show me directions to Gary Allcock

GARRY ALLCOCK and his ALL STARS BAND AND SINGERS

Garry Allcock and the "All Stars" band pay tribute to the famous big bands of the "forties" followed by a musical tribute to
Frank Sinatra & Barbara Streisand
featuring
Dave Summers & Tina Law
The "All Stars" will also pay tribute to Benny Goodman and Gene Krupa.
This special "One Off" show will feature some of the Midlands top musicians and is not to be missed. For more information contact Garry on 0121 4757524


GARRY ALLCOCK and his ALL STARS BAND AND SINGERS

THE "ALL-STARS" FUNCTION BAND Dance the night away to this very popular band variable in size to suit venues, type of function, or budget availble etc. The band plays a mixture of Glenn Miller, Motown, Beatles and non stop Party Pop


THE "STARDUST" ORCHESTRA Authentic 1920's, 30's and 40's band playing the great standard tunes of the era. This is available in size to suit requirement

GARRY ALLCOCK and his ALL STARS BAND AND SINGERS

The Midlands most versatile band is always in constant demand throughout the UK for public, private and corporate functions....

Leave your review of Gary Allcock 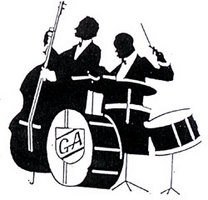